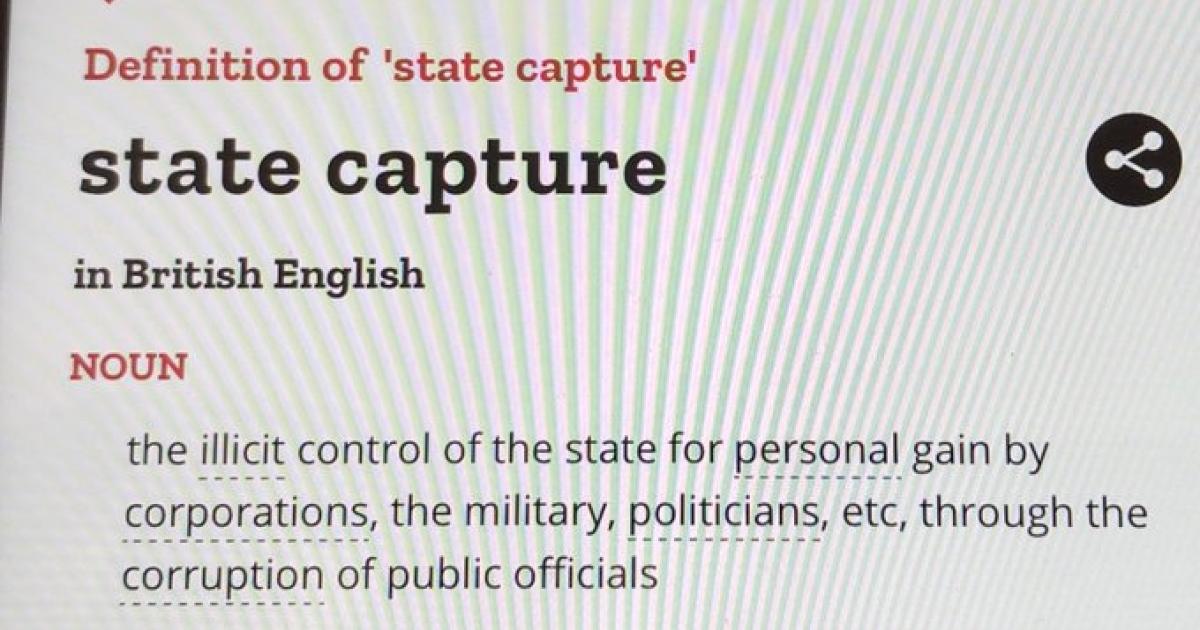 State capture is a dangerous development that must be stopped

… State capture is indeed a dangerous development in our march towards lasting peace and democracy because it creates and accentuates a disconnect between the people and their rulers, which could easily lead to conflict. It should be avoided at all costs.

According to Wikipedia, state capture is a type of political corruption in which private interests significantly influence the decision-making processes of a state for their own benefit. The term was first used by the World Bank around the year 2000. It has been specifically applied to situations where small corrupt groups use their influence over government officials to capture government decision-making in order to strengthen their own economic positions.

Such has been the perennial case of Liberia where a few individuals with access to power use that power to pluck their nests. Previously, for example, almost every one of those individuals who currently dominated the political landscape were nothing more than economic and political dummies. But today they have become rich not by dint of hard work but by sudden flight.

During the reign of President Sirleaf, the practice of the LPRC management granting facilities/overdraft agreements to oil importers for oil it (LPRC) did not own was well established on drafts worth thousands of dollars worth of petroleum products awarded to selected individuals/firms.

Recall that some time ago, the media spoke of very large quantities of petroleum products disappearing from the storage tanks of the LPRC. Some importers complained that the balances reflected in the books did not match the fuel actually available in the LPRC’s storage tanks.

And because importers were showing strong reluctance to place new orders for fuel imports, a shortage had ensued. The Russian-Ukrainian war had driven up oil prices around the world and Liberia was no exception. Naturally, the price of petroleum products on the local market has risen sharply.

That was a little over two months ago. Next, oil importers made representations to the government to implement a price hike for the commodity, particularly diesel (fuel), which currently sells for US$7.00 per gallon. But the rise in prices leads to shortages of products on the local market.

Meanwhile, profiteers taking advantage of the situation moved quickly to exploit the situation. According to informed sources, a syndicate involving LPRC officials and some importers was illegally and surreptitiously transporting fuel across the border into Guinea, where it sells for a much higher price.

And then came the headline-grabbing shock: Petro Trade, an oil-importing company whose thousands of gallons of its products had disappeared or remained untraceable. But according to well-informed sources, the announcement was a ruse intended to deceive the public into believing that Petro Trade had indeed been the victim of a theft.

In addition, according to informed sources, Petro Trade, which allegedly acted in concert with certain senior officials, including lawmakers, among them a well-known senator, had conspired to maintain the price of diesel fuel at $7.00 per gallon. rather than $5.00 – the current world market price.

In total, according to knowledgeable sources, in order to compensate Petro Trade for the self-reported disappearance of its products from the LPRC storage facility, only Petro Trade will be allowed to import diesel fuel and the $2.00 that it harvests on every gallon of diesel. is shared between a certain senator (name omitted), the Lebanese importer (Petro Trade) and a very senior official (name also omitted).

In total, according to sources, the Lebanese importer, the senator and a very senior government official should reap the tidy sum of 50 million dollars from the agreement. Meanwhile, the ordinary Liberian is unfairly left to grapple with rising commodity prices in the local market amid an acute lack of social services or a national safety net.

This type of activity seems indistinguishable and analogous to the crude capture of the state by a few individuals in positions of authority and influence. Just about everything is bad or seems bad in the country. The people’s economic hardship may not be easing any time soon, according to a well-known former Liberian diplomat.

Lest we forget, the developments unfolding in neighboring Sierra Leone should prove instructive, particularly for national leaders. The recurring theme of their protests is corruption – official corruption of course. And the protests, say political observers, are indicative of how a people confronted with poverty and official state corruption can, in desperation, take matters into their own hands.

Our national leadership, it seems, seems far removed from the realities of daily existence; it would therefore not be surprising if it were caught off guard as was the case recently in Sierra Leone where war was practically raging in the streets, while its leader was on holiday abroad.

State capture is indeed a dangerous development in our march towards lasting peace and democracy as it creates and accentuates a disconnect between the people and their rulers, which could easily lead to conflict. It should be avoided at all costs.